Bon Appétit once published “California: Food’s Golden State.” The magazine article showcased farm-to-table fare in San Francisco and quirky food trucks in Los Angeles. But when it came to San Diego, the featured restaurant was Rubio’s, a local fast food chain. C’mon San Diego, we can do better than mass-produced fish tacos.

The truth is San Diego has not been known as a foodie destination…until recently, that is. Over the past few years, the burgeoning craft brewing industry has drawn more taste-centric travelers to the area, and with the new breweries have come new restaurants that are redefining San Diego food culture.

Nowhere is this more apparent than in North County, a region that includes Carlsbad (home of LEGOLAND), Escondido (the original Stone Brewery), Vista (the new capital of craft beer), and Oceanside (an eclectic beach town just north of Carlsbad).

Just a few years ago, you had to drive to San Diego proper to find culinary innovation. Today, many of the city’s top chefs are finding their niche in North County, right alongside the surfers and master brewers. We recently visited with a handful of chefs in Oceanside, asking them for insight into their craft and North County’s dining trends.

When the economy went into a recession in the late 1990s, Christine Loyola seized the opportunity to make a career change. After years in investment banking, she was laid off with one year’s severance pay. Undeterred, Christine used the opportunity to go to culinary school in San Francisco. After completing the program, she worked at Chez Panisse and Le Farine in Berkeley before moving to Oceanside to join her brother, owner of the Succulent Cafe.

Christine started Petit Madeline Bakery & Bistro, which quickly developed a loyal following. Although Christine considers herself “a savory chef first and foremost,” she is best known for her decadent pastries and desserts, which have just the right amount of sweetness to let the flavors of the other ingredients burst through.

The savory menu rotates weekly. On our recent visit, the special included a breakfast bagel stacked so high with mushrooms, tomatoes, avocados, onions, basted eggs, and beurre blanc sauce that you literally need a fork and knife to eat it. Christine says she dreams in flavors and that much of her inspiration actually comes to her in her sleep.

Like the food, the ambiance at Petit Madeline is Californian through and through. Located in a historic building across the street from City Hall, this “bakery by the beach” is the kind of place you could easily bring a book or your laptop and stay for hours.

Growing up in Lima, Peru, Iole Revilla’s life revolved around food. “Whenever my family got together, the question wasn’t what to do, but what to eat,” says Iole. It’s only natural that Iole was drawn to a culinary career.

After attending the Cordon Bleu in Mexico City, Iole moved to North San Diego County where she sold her desserts at local farmers markets. But she had always dreamed of opening a restaurant, and in 2012, her dream came true when she opened Panca Peruvian Cuisine & Rotisserie on Pacific Coast Highway in Oceanside.

Named for a Peruvian pepper, Panca features classic Peruvian cuisine inspired by Iole’s childhood. The signature dish is the rotisserie chicken, which is marinated for two days, rubbed in Peruvian spices, and served with mayo and pepper sauce alongside a small salad and potatoes. Iole actually went back to Peru just to hone her chicken recipe, and her dedication shows in every mouth-watering bite.

Whatever entrée you choose, save room for what comes after. Our favorite is the caramel crème brûlée. Iole explains that crème brulee is not a traditional Peruvian dessert, but it was so popular at her farmers market stand, she had to add it to the menu.

Panca has a casual, unassuming vibe. The walls feature gorgeous images of Peruvian food staples, and the staff is extremely friendly and knowledgeable. Sunday is the restaurant’s busiest day, as it’s the day when Peruvians traditionally go out for a rotisserie chicken dinner.

When Davin Waite opened The Fish Joint in his hometown of Oceanside in 2004, his friends and family thought he was crazy. “I probably was,” he says, “It was not the kind of place you’d ever think about going. But grit inspires the best artistry.”

After The Fish Joint plus a few years in catering, Davin quietly opened Wrench & Rodent Seabasstropub on Pacific Coast Highway in late 2013. In spite of having no sign and no marketing, the unconventional sushi joint took off, and today is one of the most raved about restaurants in North County.

When developing his out-of-the-box creations, Davin draws on his experience at several prestigious sushi restaurants, including Café Japengo in La Jolla. He also finds inspiration in the ingredients he buys, often using unconventional parts of the fish he sources from Catalina Offshore Products.

Waite explains, “A lot of good things in cooking came from peasant cuts. It shows the ingenuity of the human spirit. It’s a very Native American approach. If you’re going to eat an animal, respect it by making sure nothing goes to waste.”

While Davin and the three chefs on his team are always coming up with new specials, the anything-but-standard menu features fresh interpretations of the traditional sushi roll. Try the “Wetbrain,” a shitake mushroom stuffed with krab, spicy tuna, and avocado, which is then deep fried and garnished with root beer teriyaki and dried, shaved bonita. Another favorite is the ceviche flight appetizer, which changes every night.

Book a stay at Southern California Beach Club during your taste-cation to stay close to all the local culinary action. Bonus: All units come with fully-stocked kitchens, so if inspiration strikes, you too can prepare some of your own gourmet meals while on vacation. 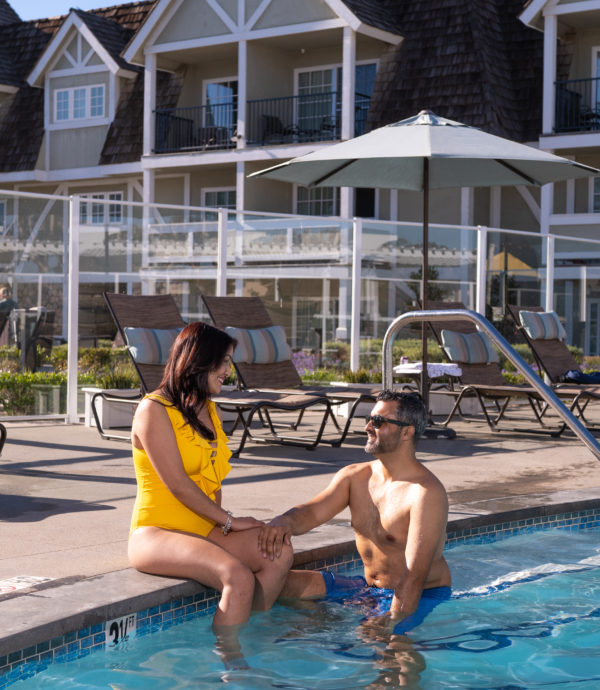 Southern California Things to Do in Carlsbad

A Weekend in Carlsbad